About us Known as the "Queen of water towns", Vichy is a spa resort of 50 000 inhabitants situated in the centre of France, 360 kilometres south of Paris, at the foot of the extinct volcanoes of the Auvergne. 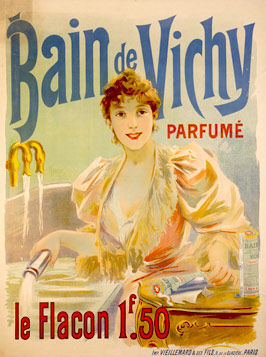 Its fame comes from the natural carbonated sodium thermal spring water which gushes out at a temperature of between 22 ° C and 75 °C. The first Roman thermal baths date back over 2 000 years. They became the property of the kings of France in the 16th century. But it was under Emperor Napoleon III, in the 19th century, that the Vichy thermal baths were truly developed with their management being entrusted to a private company, the Compagnie de Vichy. Thanks to its dynamism, Vichy became an internationally renowned spa town at the beginning of the 20th century, which welcomes hundreds of thousands of French and foreign spa visitors.

Founded in 1862, the Compagnie de Vichy, owner of the VICHY CÉLESTINS Spa Hôtel, is one of the oldest businesses in France. This prestigious firm with 300 employees actively contributes to Auvergne's national and international influence.

After belonging to the Lords of Vichy, and then the French monarchy, the Vichy thermal estate became the property of the state with the French Revolution. In 1853, the State gave Lebobe, Callou and Co. the concession to handle operations of the thermal spa.

Nine years later, it transformed into a public company under the name of Compagnie Fermière de l'établissement thermal de Vichy and was operated for the state. For this reason, it is committed to improving and maintaining the property of the State and pays royalties to the government.

Up until 1954, the company was directed by its founders or their descendants, in particular members of the Callou family. It became a subsidiary of the Brasseries et Glacières de l'Indochine. In 1968, it was acquired by the Perrier group. In 1992, the Castel Group, or the Aquitaine Investment Company, acquired Compagnie de Vichy. Since 2005, Mr. Jérôme Phelipeau is its majority shareholder.

The Compagnie de Vichy is the concession holder of two thermal spas in Vichy as well as a group of properties that encompasses nine springs, including the celebrated Vichy Célestins, and it also owns the 5 star VICHY CÉLESTINS Spa Hôtel as well as two 3- and 4-star hotels.

This represents a total of 400 rooms, and more than 160,000 thermal spa treatment days in 2010. The Compagnie de Vichy has invested in the construction of a very high-end Thermal Spa, with 7,500 m2 of space making it the largest in Europe, in order to bring to customers rigorous thermal medicine combined with an unmatched level of comfort.

"We still have tremendous development potential," according to Jérôme Phelipeau, President and General Director of the Compagnie de Vichy

While thermal spa treatments constitute the bulk of the operations, with 25% new spa clients every year, for several years now under the initiative of Jérôme Phelipeau, the Compagnie de Vichy has kept up with the times and opened itself to new opportunities: "We add value to the healthful properties of thermal care with well-being and beauty treatments. We still have tremendous development potential in the areas of prevention, therapeutic education and follow-up treatments. The second challenge involves communicating the expertise belonging to the Compagnie de Vichy. We make this expertise available to investors as we create health-beauty-wellness centers or when we relaunch current facilities following renovation.

The sale of mineral water

In 2012, 40 million bottles were commercialized under the Vichy Célestins brand name of which 20% were exported to over twenty foreign countries.

Specialised in the treatment of digestive and metabolic disorders (obesity and diabetes) and rheumatological complaints, the Compagnie de Vichy runs three thermal establishments in Vichy linked by "bathrobe" corridors to three partner hotels. The whole represents 250 treatment cabins and 400 hotel rooms which welcomed over 22 000 spa visitors in 2012.
The Thermes Callou, reserved for state-aided patients, has 150 treatment cabins, which are linked to the 3* Hotel Ibis with its 140 rooms. The comfortable setting of the Thermes des Dômes (52 cabins) provides treatments for both state-aided patients, short-term spa visitors and visitors for a health and form stay. This space is linked to the 4* Hotel Mercure Thermalia, which offers 78 rooms, which in turn is part of a 50-room hotel residence.
And finally, the Vichy Spa Hotel les Célestins is associated with the Thermal Spa and its 7 500 m2 Medical Spa, which includes 50 treatment cabins devoted to wellness and health. This high-end modern hotel has 120 rooms and 11 suites. The hotel complex, one of the largest in Europe, which blends lifestyle, comfort and elegance with relaxation and regeneration, is located on the banks of lake Allier, opposite the Vichy golf course, adjacent to the imperial chalets, in the heart of the town and its parks.

The brand name "Laboratoires Vichy" is distributed to chemists' thed world over and thus contributes to the international fame of Vichy. The Compagnie de Vichy has established an exclusive partnership for cosmetic products derived from Vichy water with the International Active Cosmetic Division of Oreal.
The same applies to the manufacture of Vichy pastilles which has been given to the Kraft group.

For over a century, the Compagnie de Vichy has developed its unique know-how in managing health centres and welcoming and accommodating its clients. Its subsidiary, Vichy Spa International (VSI) specialises in developing and commercializing Spa-hotels in France and abroad, which it manages on behalf of its investors under the brands of Vichy Spa Hôtel & Resort and Vichy Thermalia.