Skip to main content
Discount
Exclusive
private sales
private sales
sign up for our Newsletter and enjoy exclusive advantages
After sign up to our newsletter you will receive a confirmation. We invite you to check regularly your mailbox to receive our newsletter
News listing page
#VichyCelestinsSpaHotel
Health
06.03.2017
Thermal water music therapy is part of the Serenity Body and Mind programme
François Louche, who is at the origin of the technique for this exclusive spa treatment, talks to us about this unique spa treatment, which is also a new genre of treatment.

The « Serenity Body and Mind » programme was created in 2016 for a minimum of 3 days, it helps develop personal fulfilment. It teaches how to control ones emotions and let go! We invite you to discover the « Musical spa treatment in Vichy thermal spa water » which enhances relaxation, helps you get to know yourself better, and boosts creativity.

what happenS in the spa treatmenT session ?

We are aware since Antiquity of the effect of music and water on the psyche, the nervous system, motricity, speech and hearing, balance and the experience of the depths of human existence. It was, therefore, important to bring together these two therapeutic principles and create «  the musical spa treatment in Vichy thermal spa water ».

As its name indicates, the musical spa treatment in thermal spa water consists of listening to music played under water. Supported by a sub-aquatic care treatment specialist, the client lets themselves be caressed by the musical waves and discovers a universe of gentleness and well-being, which helps them leave behind their stress and tensions.

HOW DOES MUSIC EFFECT OUR NERVOURS SYSTEM UNDER WATER, COMPARED WITH MUSIC NOT UNDER WATER, WITH OR WITHOUT HEADPHONES?

We have observed that sub-aquatic music is perceived in the centre of the body, even with the ears blocked, whereas music in the air is picked up by the skin and heard in the ears. 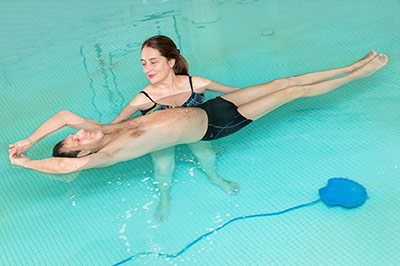 This experience seems to show that in water, the body resonates with musical frequencies. Depending on how we listen, the musical vibrations are localised at different levels of our corporal sensitivity. Bass notes are felt in the hips and legs, medium notes in the thorax, and high notes in the head. The nervous system picks up the tactile, muscular and bone sensations caused by the musical vibrations. To hear the music, our attention, our vigilance and our listening momentarily leave the tensions and habits linked to the air environment, to let the music circulate around our body. Perception is, therefore, proportional to the quality of physical and psychological relaxation.

WHAT ARE THE QUALITIES AND BENEFITS OF SUB-AQUATIC MUSIC?

They are numerous! Similar to in the air, sub-aquatic music has an effect on many neurophysiological functions of the human body. The scientific research undertaken by Bernard Lechevalier and Hervé Platel, Professors of Neuropsychology at Caen University in Normandy, France, confirms that music helps liberate hormones such as dopamine and serotonin, which have real effects on the nervous system.

It's the same in water, but more rapid and deeper. Firstly, the musical rhythms and bass notes have an effect on postural functions, balance, and motricity; they are, therefore, very efficient at relieving back pain. The instrumental melodies caress the skin and these sensations create pleasant emotions. The musical harmonies calm the psyche and provide a climate of internal peace. Finally, the very high notes stimulate the brain and open the door to verbal communication.

WHAT CRITERIA DO YOU USE IN SELECTIONING THE MUSICAL WORKS FOR THE CARE TREATMENT PROGRAMME?

I choose music relative to the sensibilities and tastes of the person.
In general I start with classical and baroque works, then I go back in time with traditional and ethnic music, then come back to contemporary music, in order to make a real voyage in time. The tempo, slow or quick, has an effect on psychological dynamism.

But to make a magnificent internal voyage, the music has to be reworked and made deeper and more dense, transposing it in order that it accords with the stages of our biological and psychological growth.

COULD YOU SAY THERE IS A « WELL-BEING SUB-ACQUATIC FREQUENCY » ?

The fact that in water the speed of sound waves is faster than in air means its relaxing action is that much more immediate.

Due to its fluid texture, water conveys sound waves magnificently and reinforces their energy dynamics. Moreover, sound waves favour an energetic transfer of the therapeutic elements contained in the thermal water.

When all parts of the body resonate the music, a psychic and sensorial frequency of wellbeing exists which translates into an expression of joy and happiness.

WHO IS THE « MUSICAL SPA TREATMENT IN VICHY THERMAL SPA WATER » FOR?

First of all it is not necessary to know how to swim. In fact the sub-aquatic musical treatment can sometimes even reconcile the person with water! This treatment is really for people who want to open a door to self awareness.

AS THE « CREATOR » OF THIS SPA TREATMENT, FRANÇOIS LOUCHE, COULD YOU, IN A FEW WORDS, GIVE US SOME DETAILS OF YOUR PROFESSIONAL CAREER?

I am a composer trained in audio-psycho-phonology (APP) and bioacoustics.

I did my research and investigations in the university environment and today certain therapies and re-education processes I created are being taught at Vienna University, Santander University (the Phillippus programme) and at the Kinesiology Centre in Malaga...

For 25 years I have trained Health, Education and Arts professionals in the subject of sub-aquatic listening which has preventive, re-educational and curative characteristics.

These news may be of interest to you